Hi everyone - two great things to talk about today, though to be fair neither of them are particularly statistical.

First off, today at midnight the Quantifying Star Wars kickstarter project that I've been running for the past month finished up.  It was successfully funded and then some, and now I have some work to do in putting together the book.  I'm looking forward to it thanks to all of you, whether you backed the project or shared word of it with others or simply read and enjoyed the posts.

Since I'm going to be going back to those original posts to put things together in the upcoming weeks I might also recommend commenting on those posts if you have anything you think I should add or change, etc.  I'll certainly go back and read them before I get started on each chapter.  Here are the links so you don't even have to go back and find them yourselves:

Secondly, it was almost one year ago today (it's a year ago on Thursday, actually) that I started this blog.  I had a vague idea of what I wanted to do but really had no idea if I'd still be doing it a year later.  I've had a lot of fun with it and come up some interesting findings that I wasn't expecting.

For instance, who would have thought that I was actually right that Reese's Pieces are screwing with our heads (http://theskepticalstatistician.blogspot.com/2012/09/the-reeses-rainbow-validating-childs.html) or that no one really seems to care if the NHL doesn't play huge chunks of their season (http://theskepticalstatistician.blogspot.com/2012/10/nhl-lockouts-do-they-matter.html) - there was a lockout this year?  This year?

Who would have thought that I could accidentally come up with a language made from Tetris pieces (http://theskepticalstatistician.blogspot.com/2013/07/tetris-pieces-exponential-growth-and.html)?

For every good piece I've written, though, there have certainly been other pieces that were just not as good, or downright reaching.  The fact that I updated with a post every Wednesday this year (even when I was pretty sick with what turned out to be the flu: http://theskepticalstatistician.blogspot.com/2012/12/on-fevered-temperature-measurements.html) meant that some weeks I was just writing on the best thing I could come up with that week.  Some of those posts could have used more polish, and some of those posts probably shouldn't have even made the cut.

I've been thinking about it for a while, and for a bit wondered if I should just call this a year long project and shut it down.  The interest and kindness I've received from you - the readers - has convinced me that I should keep with this, at least in some capacity.  Some of you will be getting the Quantifying Star Wars book in a few months, but I'd also like to keep tackling new problems and questions as they come to mind.

Particularly, there are a few half started posts I have that I've kept putting off because I could use more than a week rolling them around in the back of my head.  The short time frame I've been keeping has been great for quick easy posts, but has limited me from tackling some of the things that I think could actually be quite interesting.

That said, I want to move away from the 'updating every Wednesday' and instead commit myself to updating at least the first Wednesday of every month.  There will be some months where I come up with some quick stuff I can put together and you'll get some extra posts.  The posts you do get, though, should be better, and more substantial.

I know how I'd feel on the readers side of this.  I've followed plenty of webcomics and podcasts and all sorts of other periodic things that slowly went to reduced schedules, and there's a feeling of disappointment that comes along with it.

Don't think about it as losing a few good posts a month - think of it as losing all the bad posts each month to make the good posts better.  If I'm not writing good posts, call me out on it.  And - good or bad - comment on the posts a bit more, everyone.  =)

Wordfeud and you (and me)

I know that many of you play a lot of games on your phones and tablets and facebooks and GameBoys (I swear I know people who still use this as a blanket term for handheld electronics).  I don't play many - I tend to prefer a console or PC experience for my gaming - but do play a few.

I tend to play DrawSomething at the pace of about a turn a month, and Wordfeud a little more frequently (the mobile app, not the facebook app, though I guess they work cross-platform).

Wordfeud, for those of you who don't play it, is basically Scrabble.  By basically, I mean almost exactly.  The placement of double and triple word and letter squares on the board are a little different (and you can play a board where they're laid down randomly), but that's about it.  Makes for some subtle but interesting differences. 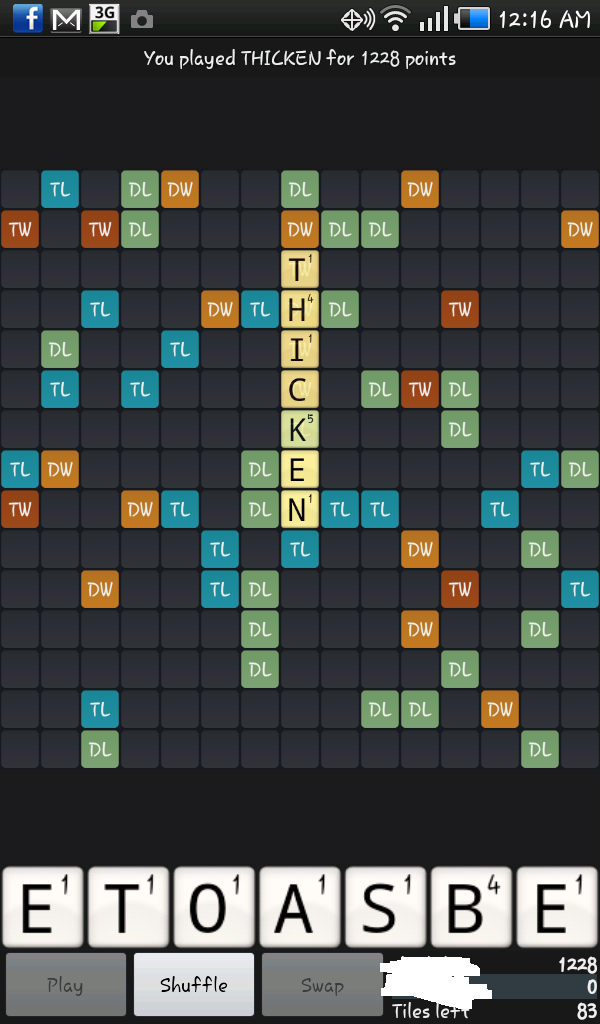 The cool thing is that a few months ago Wordfeud started recording stats within the app against all the other people you play against.  I generally have a few games going on at a time, so I figured at some point I'd take a look at the stats that I've accumulated.

Now, there's not a whole lot I can tell from these stats on their own (we'll talk about the problems), but I thought it would be interesting to discuss exactly I'd need to be able to know more.

Basic stats are given about each of your opponents, in terms of win-tie-loss.  I'm not going to call out my friends individually, so we'll just list them anonymously.

We can get a range of the people I'm playing against by ranking them a bit in terms of difficulty (or at least the difficulty I seem to be having with them).  We'll do this with simple win percentage (FYI, we'll treat that single tie as not a win or a loss, but simply as not a game.

That gives us another table.

Which we can change into a rudimentary chart. 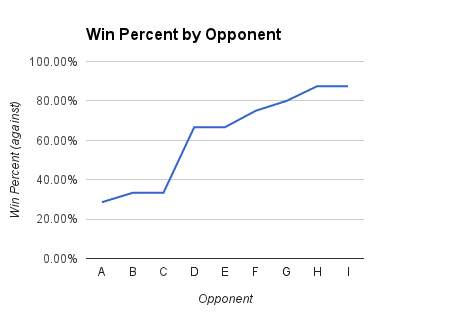 You can see that there are a few problems with this chart.  The x-axis is both arbitrarily scaled and ranked.  It's done with the best information I have available at the moment.  Ideally, I'd have some stats on the people I'm playing against in terms of their overall win percent.  This would allow me to rank them in terms of all the games they've played, not just all the games that they've played against me.

It would also allow for them to be scaled to that win percentage, rather than simply all spaced the same distance apart.  There are two pairs of individuals who I have the same record with.  They're certainly not identical in skill, so more information would help to differentiate their actual ability.

What we can tell from the graph is that I'm not playing a bunch of people who are all better or all worse than me, but a good mix of people across a good range.  That, or the results of games are just random noise...

Overall, more data is the best way to tell.  Interested in seeing how you measure up?  Play me a game (or 20) - my username is 'paul_28'.  Don't miss the underscore, unless you want to just play against some random guy (which I might actually be to some of you).  I will mine your data.
Posted by PC at 8:56 PM No comments: