Is it possible...that you've watched Ancient Aliens before?

That is not to say that I believe that any of the content is accurate any more than I believe that Jonathan Strange and Mr. Norrell is an accurate telling of how the Napoleonic Wars played out. The draw for me, at least, is still present, even if simply you consider it a fairly entrenched fiction. For what it's worth, they know how to craft a pretty entertaining story. Especially this guy. 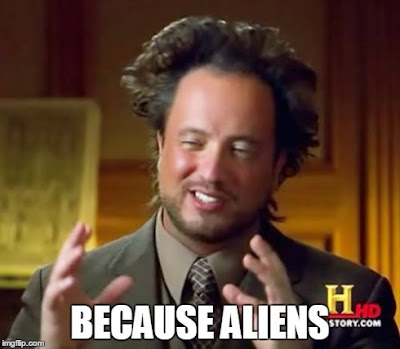 This guy is Giorgio Tsoukalos, and yes he does have a name, and yes I did know his name off the top of my head. That's not the point. If you've ever seen him on a television then you've probably seen (knowingly or not) a bit of Ancient Aliens.

The premise of Ancient Aliens is pretty simple: Aliens screwed around with our history and/or prehistory. The story wrapped around it is a bit more complex - they've found a way to fill out 7 seasons worth of shows, after all.

We could talk about Ancient Aliens for hours, but in reality I'm really here with some pretty simple data. It has to do with one key phrase that I swear they say more or less constantly. That phrase is the start of a sentence:

Now, the rest of the sentence may vary by episode. For instance, the question might be:

"Is it possible that otherworldly beings have been using basic mathematics and geometry in an effort to communicate with us?"

"Is it possible that German scientists had discovered a way to transport humans from one time and place to another, as some researchers believe?"

"Is it possible that some of the world's most mysterious caves really are home to extraterrestrial beings?"

It's a pretty brilliant setup, because it often plays off the black swan problem. Is it possible that otherworldly beings have ever tried to communicate with us using mathematics and geometry? Well, sure? It's very hard to say that no other civilization that may exist in the universe has never done exactly what we've already done a few times: try to communicate with others using mathematics and geometry. 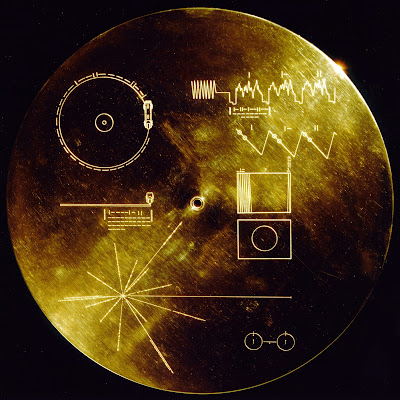 I mean, mathematics and geometry is a lot more likely to work than just sending out a whole bunch of Rick Astley videos.

Put simply, this statement is exceptionally hard to falsify. This is exactly what makes it so useful.

Now, some are a little less believable than others. Did German scientists (they're talking about WWII and Nazi scientists, to be fair) build a time machine? All signs point to no. At the same time, if you pitched a script to me about a handful of German scientists who accidentally time traveled (let's say to a distant planet) and then were found by Kirk and the gang, well, I guess I'd suspend disbelief for a little while.

What I'm saying is that, if nothing else, it at least makes for some interesting speculative fiction.

Did I mention that I really like speculative fiction?

If you really want to dig in to some Ancient Aliens transcripts, I suggest you go to this site:

Just pick an episode, and let crtl+F do the rest.

In fact, that's exactly what I just did! By doing some simple searches of episode transcripts, I was able to piece together how many times the phrase "Is it possible..." is used in each episode. Honestly, I was expecting dozens. It's...not that high. I guess it's just the kind of phrase that sticks with you.

And, if we want to look at everything in the same graph:

Is it possible that this post is really really important? No. But if nothing else, it's a great example of how easy it can be to abuse the principles of falsification to tell a story.

There are data everywhere.

I'm constantly looking for it, and I'm constantly compiling it. A lot of this compilation doesn't really go anywhere, other than having some data, and maybe having a slightly different way to think about something.

I watch a lot of weird stuff on TV. A lot that is weirder than today's focus. Today's focus is on a show called Impractical Jokers: 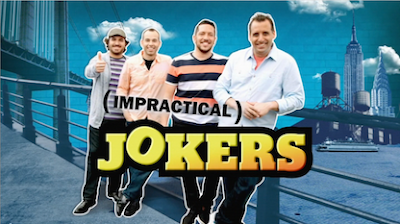 If you haven't seen this show, check it out. I've never been a fan of shows that just capitalize on making a joke out of random people, let's make that clear. It's too easy to just feel for the person being made fun of.

Instead of making a joke out of random people, the four guys on this show make a joke out of each other. It's the difference between laughing at random unsuspecting people and laughing at people who have placed themselves in that situation. It's still awkward, and still weird, but usually pretty funny. It is a subtle difference.

The format of each show is a series of small competitions, with a clear loser at the end of each show that has to then handle a punishment put together by the other three guys.

All it takes is the word competition for me to start to thinking about how to capture and track these results over time. I decided to give the first season a go, to see how the numbers play out.

In terms of the first season, here's how the end-of-show losses broke down:

You can see that Q did the best during the first season, though not by much. Over the course of 15 episodes, losses were really pretty evenly distributed. Take note that I'm not including the final episode of the season, where there was a 4-way tie. If you wanted to include it you could just add 1 to each bar.

Frankly, this graph is almost suspiciously even, raising the question of how orchestrated (easily done through editing) this first season was, say, by producers.

There hasn't only been one season of the show, though, and we can look at the second and third seasons:

A 4th season is currently ongoing, but we can look at what's happened so far:

These later seasons do seem to be a little less balanced than that first one, which also becomes more obvious if we just look at the trend overall:

It's fairly close, within about a half a dozen or so between the higest (Sal) and lowest (Joe), but there's also some clear separation going on. Murr and Sal do seem to lose more frequently than Q and Joe.

We can also take a look at how this has played out over time:

Again, there's not a huge effect here, but you can see that Sal and Murr are both above what would be expected evenly (25%), and Q and Joe are both below. A quick chi-square goodness of fit for equal proportions fails to show that these differences in proportion are significant (3, N = 89) = 1.64, p = .6494.

That said, I would imagine that six more (or fewer) punishments at the end of these episodes are large enough effects to those receiving (or giving) them. Good job, Joe and Q!

What does the Xur sell?

Yes, it's a Ylvis pun. That out of the way, the rest of this is another post about video games.

Xur only shows up on the weekends, and only sells a few things each week. In particular, he sells one exotic (pretty fancy) weapon each week. There are entire websites that are set up to keep track of Xur's history. He's a popular guy.

These lists are easy to find, but I figured there might be some ways to condense this information into easier-to-digest form. That is, to make a picture.

Here are the primary weapons that Xur has sold up to this point:


We can incorporate this information to test the assumption that the proportion of each type of weapon sold is related to the proportions of weapons in these groupings.

14 different weapons have been sold, so the expected proportions for primary, special, and heavy weapons are 7/14, 3/14, and 4/14, respectively.

Each type is in the right ballpark, though there is some difference between observed and expected. The effect isn't significant, nor particularly large. The chi-square value with two degrees of freedom is less than 1, if you're curious. With this information it's difficult to say anything in particular, and impossible to say that this is either random or non-random. It certainly doesn't seem to imply that there is any bias in the selection of weapons each week, at least at the level of primary/special/heavy.

While we can't say definitively that choice of type of stock is or isn't random, the information to this point fails to provide any conclusive evidence that it is not.

Before we wrap this one up there's another way to potentially look at the first graph, and that's to be forgetful of less recent values. Over the long run, things tend to smooth out. If we only remember the last month or so of Xur sales, things look at lot less clean. All we have to do is forget everything that happened more than a month earlier, at every given time point:

This chart is probably a better representation of human memory than the earlier one, and might start to explain why people are often complaining how non-random Xur's sales seem. Week 34, for instance, might have felt a little rough without considering the broader picture.