Games of The Price is Right: The Wheel (Part II)

If you haven't read the first post that I wrote about The Wheel on The Price is Right, I'd suggest that you start here:

If you've read that post you know that it mostly relates to what happens to the first contestant to spin The Wheel.  I promised that I'd talk more about the second and third contestants and their time at The Wheel, and that's what we're going to look at today. 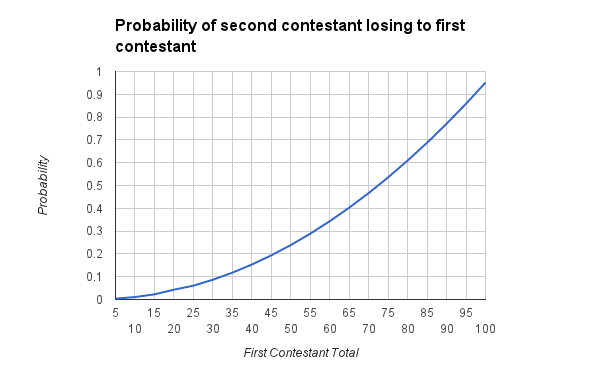 If each contestant only received one spin this would be the end of it, but the second contestant gets a second spin if they come up short.  Thus, the 45% of time where they fail to beat 50 cents they get another chance - during that chance they also have a 50% chance of beating the first contestant.

Again, if you didn't listen to me at the beginning, this might be a good time to read that first post if you haven't before.

For completeness, here's what they're looking at: 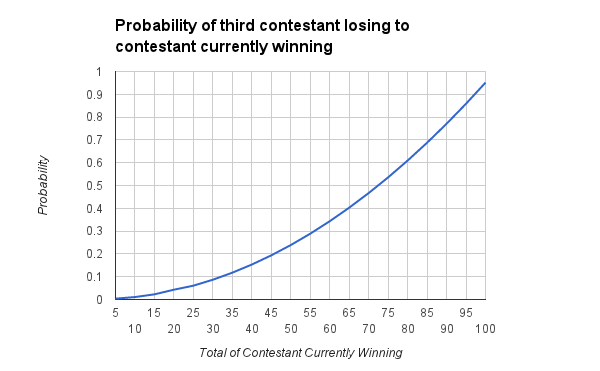 Like I said last time, the third contestant really has the least amount of choice, and the least complexity relating to their probabilities.  They step up to The Wheel and have a number that they have to beat.  Occasionally - if the first and second contestants have both busted - they have no number to beat.  If they beat that number with their first spin then they're done - if not they get a second spin.

To this end, the third contestant really presents the least to look at.  The above graph really tells the whole story.  If you're the third to spin at The Wheel on The Price is Right, congrats - you've done something right in your pricing game.

Given that the first post covered the first contestant, we are left with the second contestant and the decisions that they have to make.

The most interesting situation is when the second contestant has beaten the first contestant, but still has a score that's not great.  There are a number of things that have to be considered.

The other main thing that likely comes to mind quickly is the probability that the third contestant beats the spin you currently have and you lose that way.  This is actually the graph that it looks like we're going to keep coming back to - it's the same as the two graphs we've already looked at and is simply based on the probabilities of beating any given spin with two more spins.

The second is perhaps a bit more reasonable, and compares the current odds of winning against the average odds of winning with any higher spin.  Since your spin is random, the mean should be a reasonable expectation of what contestants would get on average. 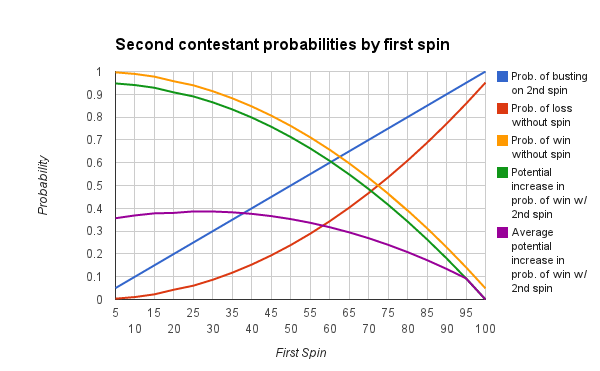 So, there's a lot to balance here.

The yellow and red lines give a picture of what happens if you don't spin.  Until you get to 75 cents you have a greater chance of the third contestant beating you than you beating them.  That would seem to suggest that you should keep spinning as long as you don't have 75 cents, right?

Well, that's not the entire story.  At 70 cents you also have a 70% chance of busting on a second spin, and you only stand to gain a little less than 30% greater odds vs what you currently have.

It's a tricky situation: you're standing at The Wheel as the second contestant, having just beat the first contestant with a spin of 60 cents.  It might be the worst choice you have to make at The Wheel.  Regardless of your choice you still have the odds against you - if you spin you have greater than 50% chance of busting, and if you don't spin you have a greater than 50% chance of being beaten.

The difference is that you have a slightly greater chance of losing if you don't spin than if you do, even though the act of spinning is probably a little harder as a psychological choice in the moment.  If you stay you stay 'safe', while if you spin you're taking 'a risk', even though the risk is safer than staying.

As the first contestant you need to get to 85 to 90 cents before you have a fair chance at getting past both of the next two contestants.  That doesn't mean that you can't win with less, but your odds aren't even until you get into that range.  It also doesn't mean you should spin up to that level, as you still need to cope with busting.  The first contestant simply has a wider zone of unhappy choices.

The second contestant has things a little easier, as they have better than even odds once they reach 75 cents.  The risk of busting is also important, and should actually stop you from spinning again once you get to around 65 cents - if you happen to end up with 65 or 70 you simply have to accept the fact that you've drawn a bad hand.  Hey, at least you didn't have to spin first.

If you're the third contestant - like I've said - you have it pretty easy.  Spin until someone tells you to stop.  They're either going to usher you off the stage or tell you you're going to The Showcase.

Maybe the best advice for doing well at The Wheel, then, is doing better at your pricing game.  Order is important, and order is based on how well you do in your pricing game - if you lose you're looking at having to spin first, while if you win you just have to hope you won the biggest prize (or that the other two contestants lost their games).

Don't rely on others to fail, though: do well in your pricing game and take your spins - for a big part of The Wheel it's better to take the risk and spin rather than wait for the next contestant to fail.

Okay, okay, you might be wondering what the actual numbers break down to in the show, but that's a different post for another day.  I will give you a slight preview of it, though.  I've watched and coded a few shows at this point, and have some preliminary numbers on wins.  Of 36 times at The Wheel, the first contestant won 9 times, the second 13 times, and the third 14 times.

Hardly a large sample, but also hardly a large effect (at least as can be estimated at this point).  There is one interesting addition, though - not all those wins are straightforward wins, several of them came to a spin-off.  In fact, a third (3 of 9) of the times when a first contestant won they had to win in a spin-off, compared to only about 15% (2 of 13) for the second contestant and about 7% (1 of 14) for the third contestant.

This makes a preliminary case for the idea that when the first contestant wins they had to do a lot more (random) work to eke it out, while sometimes the third contestant just has to show up (it's only happened once so far, but occasionally both the first and second contestants bust).  More on that next time.
Posted by PC at 11:30 PM