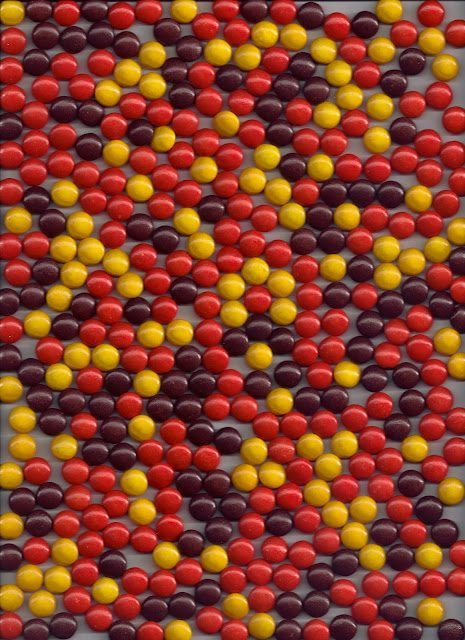 I think it's only fair to say that everyone has a few weird compulsions that are fairly benign.  One of mine is the way I eat certain types of candy.  Today we're going to talk about Reese's Pieces.

Ever since I was a child - certainly as long as I can remember - I've eaten Reese's Pieces in the same way.  Pour out a handful, then from that handful eat them in sets of three comprised of one of each color.  One orange, one yellow, and one brown.  When one color runs out, do the same for pairs of the remaining two colors.  When reduced to one color eat those in pairs or just all at once, depending on how many are left.

Odd, to be certain.  Disruptive or detrimental?  Hardly.

The result, however, is that as long as I can remember I have been accidentally carrying out sampling studies on Reese's Candy.  Over time I realized that I'd been subconsciously internalizing some of the patterns.  In particular, I had become pretty confident that orange was always going to be the color left over at the end.  Brown and yellow seemed comparable, though my inclination was that yellow was the rarer piece, so to speak.

Well, it's a testable hypothesis.  So, let's test it.

I picked up a few bags of Reese's Pieces on sale a few days ago, and sat down to count through them.  These were the big bags, and for the record I guess the big bags have somewhere around 600 individual pieces in them.

With that in mind I picked up a few more of the smaller boxes of Reese's Pieces and set to counting them.  They're quite a bit smaller, with only around a quarter of the pieces as the larger bags.  Each box again had orange showing up as the clear favorite.  The graph below highlights the relative proportions in each set (1 and 2 are the larger bags, 3-5 are boxes): 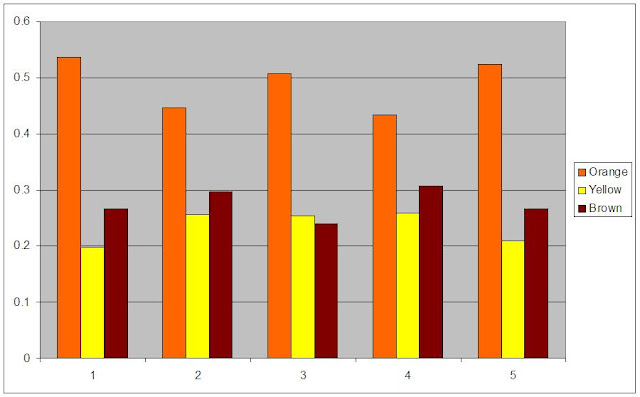 The trend seems to be there - orange is the most common color in each of the different samples.  A test of the proportions confirms that this is in fact significant, even with the small sample.  The mean proportion of orange pieces in packages of Reese's Pieces is significantly higher than the proportion of either yellow or brown.

That wraps up the first part, and it does seem that what I suspected from childhood is true - orange seems to be over-represented in bags of Reese's Pieces.  This statistically significant effect is large enough and consistent enough that I'm confident in saying that with only 5 samples.  I'm betting that the orange machine at the Reese's plant is dialed in somewhere at or just below 50% - the mean would suggest 48.96%, close enough to 50% that a larger investigation might reveal that they picked an easy half as something to shoot for.

What is more difficult is parsing out the difference between yellow and brown.  While the suspicion from my years of sampling (that yellow is rarer than brown) seems to be somewhat reflected in the trend so far, there simply aren't enough data points yet to be very confident in what appears to be at best a small effect.  There are even situations (like the first box) where yellow showed up at a higher percentage.

This is where you come in, reader.  I already have a whole lot of Reese's Pieces queued up to be eaten slowly, hopefully over the next few months or more.  I don't need to keep adding to that pile.  What I'm asking is for all of you to go out and pick up a bag, or a box, or a larger bag, and do some counts.  Teach a statistics class?  Have them do it.

Post the numbers in a comment and we can revisit this at some point and run the numbers on a larger sample.  I'll even sweeten the deal (har har) if you post numbers and mail you a (unopened) bag of Reese's Pieces for your trouble if I 1) know who you are, and 2) know where you live.  Consider it a buy one get one free.  Obviously, don't just post your address on here, but we can figure it out.  Terms and conditions apply, promotion may be canceled at any time without warning.

If there's a message in here anywhere, perhaps its that science should be all around us.  Observe your world, form hypotheses, then test them.  Teach the lesson to kids - if it involves activities like counting then eating a bunch of candy they'll probably listen.