Contestants' Row: Position is Everything (Games of The Price is Right)

Time for some more TPIR.  Today, we're going to talk about Contestants' Row again.  If you missed the first post on Contestants' Row you might start here, though unlike some posts this one is fairly standalone.

I've been coding more episodes, and one thing that has started to stand out is the proportion of time that the contestant who has the last bid on Contestants' Row wins.  It is not surprising that they would win the bidding most frequently, though it seems that they win a lot.

A simple frequency count on the winner of the Contestants' Row bids for the episodes I've watched reveals that my suspicion is quite correct - the fourth contestant does win a lot.  Like, a lot. 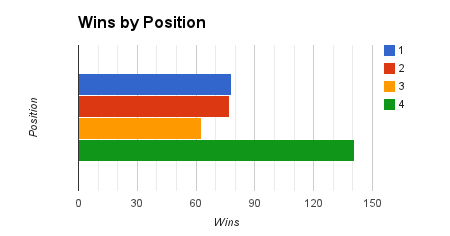 It's an interesting point that the third position is actually the weakest - they should have some advantage from knowing what the first two bids have been and only differ from the fourth bidder in that they have someone who goes after them.  This may mean that the knowledge of prior bids is simply a much smaller effect than lacking someone going after you.

I have noticed in casual watching that the first contestant also seems to win frequently.  Anecdotally it would appear that they often win by getting exceptionally close to the eventual price, blocking out the other contestants who bid after them.  This would lead to the question: do winners in different positions on Contestants' Row need to get closer to the price in order to win. 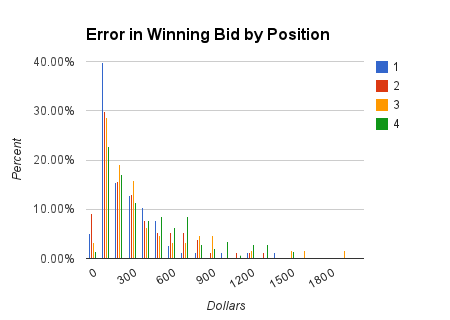 This shows the cumulative percent of contestants in each position who have won with any given bid or lower. It is clear that when the first position wins on Contestants' Row they're actually doing it by bidding fairly well.  The later bidders may suffer from trying to move away from this already established (but good) bid, though that's hard to identify.

It is also clear that winning from the fourth spot takes the least degree of precision - winning bids from the fourth position are on average off by more than any other position.  This is very likely due to the ability to bid either $1 (securing the range of all numbers below the lowest bid) or $1 above the highest bid (securing the range of numbers higher than the highest bid).  Both these bids have the potential to win while being off by a large margin.

Overall, it would appear that starting in fourth position is the best way to go, though it's also sort of out of your hands.  While this information might not be practically applicable in the moment, it might make you feel a little better if you get trapped in third position and go home empty handed.