Games of the Price is Right: The Wheel (Part I)

If you read my earlier post on Plinko you know that I'm a fan of The Price is Right.  If you haven't read it, maybe you should check it out.  Maybe you're just here for The Wheel, though, in which case read on.

The Price is Right was prime mid-morning TV when I was a child, and I'm not sure I even remember a time before I was watching it.  It's mixed right in there with memories of Sesame Street and Mr. Rogers.

The Wheel (the prime focus of the Showcase Showdown), is not original to The Price is Right - it was added in 1975.  It is used twice during each show, once for the first three contestants after the third game and once for the last three contestants after the sixth game.  It determines who from each of those groups of three will meet up in The Showcase at the end of the show. 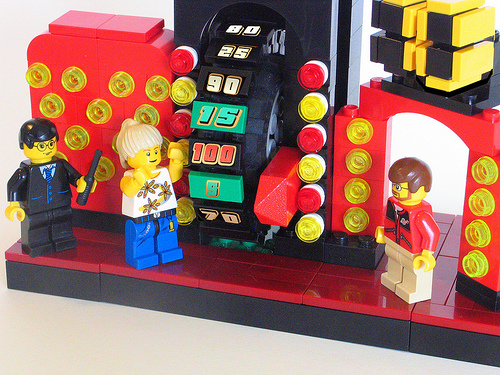 The Wheel has 20 segments that represent dollar (well, change) amounts ranging from 5 cents to 100 cents (a dollar) in increments of 5 cents.  The goal is to get closest to 1 dollar without going over (busting).  Each contestant gets two spins (the second only if needed/wanted), and contestants take their spins in ascending order of prize value won in their respective games.

Ties produce spin-offs in which each contestant gets one spin and the highest moves on.  Ending up in a spin-off produces even odds for each player due to the fact that they each only get one spin.

A lot of what happens at the Wheel is chance.  Excepting someone who is especially gifted at aiming for particular areas (something I hold as fairly unlikely), the general purpose of the wheel is a human controlled random number generator.  What isn't left to chance is player option to take a second spin.

Dependent on the value of their first spin the first contestant has a certain probability of going over a dollar and busting on their second spin.  Unlike the second and third contestants, they do not have the benefit of knowing what the other contestants are going to do. Thus they must decide how much risk to take weighed against the strength of their current spin value.

Well, just how strong is any given spin on the wheel for that first contestant?  That question has been in the back of my head for years if not decades, and it's something we can take a look at today.

There are a lot of factors that go into the strength of any value on the wheel.  Both the second and third contestants are going to get two chances to try to beat you, so you have to put up a decent number if you're going to move on.

While you don't know what the second and third contestants are going to spin, you do know (and can guess at) some of the things they're going to do.

The third contestant, for any advantages going third gets them (something to look at in another post), has the least personal choice in the matter.  By the time it gets to them they have a number on the board they have to beat.  If their first spin is higher than that number they do not get a second spin.  In rare cases, the first two contestants have both busted, and their single spin is simply to see if they can earn a bonus by spinning a dollar (effectively, the number on the board they have to beat is 0).

The second contestant gets a little more choice.  If they spin higher than the first contestant they can still take their second spin, as they still need to hedge against the third contestant.  While that should slightly increase the low end odds (the second contestant is more likely to spin if they just beat your 5 cents with 10 cents than if they beat your 90 cents with 95 cents), my initial pass at this will argue that the balance between odds of spinning and odds of busting produce a fairly negligible effect for the first contestant to be worrying about.

Therefore, I'll assume that the second and third contestants will act according to some rules and assumptions, somewhat similar to a dealer in blackjack (well, without the assumptions).

Contestants must spin again if they are below the current leading score.  This is a rule.

Like I said, the third contestant does not have a choice to spin again if they've just beat you with one spin.  This is a rule.

With these rules and assumptions we can take a look at how this works in a particular case while building the model for the general case that we can apply to the rest of the possible scores.  Let's start with the case of 50 cents.

Now, before we get too deep in this I'd like you to sit back for a minute and try to think about your odds if you are the first contestant on stage who just made that spin.  If you just hit 50 cents on your first spin and stay with it, what is the probability that you'll move on to The Showcase at the end of the show?  Got that number?  Good.  Remember it, or better yet write it down.

You're now standing off to the side of The Wheel with a big sign over your head that says .50 in big block letters.  The second contestant walks up to The Wheel and spins, and:

50% of the time they just straight up beat you.  Sorry.

45% of the time they spin less than your score and are forced to take a second spin.  An interesting thing happens with the probabilities on that second spin.  We'll look at that next.

5% of the time they spin the same as you, and tie.  We'll look at that breakdown in a bit.

Let's take a look at what happens if they spin less than you and are forced to take a second spin.  Let's start with a concrete example.

This is a cool fact of The Wheel: it does not matter if that contestant spins 5 cents or 45 cents on their first spin, just that they are lower than your score.  If you have 50 cents they have the same odds of beating you on their second spin, regardless of what they have.  There is a moving window of winning numbers and all that shifts is that the odds of coming up short start shifting into odds of busting.  The person who has 5 cents has low chance of busting but high chance of coming up short.  The person who has 10 cents has slightly higher (but still low) chance of busting but slightly lower (but still high) chance of coming up short.  They both have the same chance of losing.

That chance, if you haven't noticed, is also tied to where you are on the wheel.  If you think about the numbers the second contestant needs to hit as a window moving up and down across certain ranges of the scale (a lot like the game The Range Game, actually), then you can see that as your score gets higher that window closes to a smaller and smaller range.  The lower your score, the larger that window.

Which brings us to the point where we talk about ties.

So, we can now do the math on all the contingent percentages and sum up the situations where you are safe for now and the situations in which the second contestant has beat you.  Remember the number you came up with earlier?  The probability of making it to The Showcase with a value of 50 cents?  Well, we can now figure out the probability that you've made it past the second contestant.  That probability?  About 23%.  Yeah, not looking so great.

We can do the same math on all the starting values by hand, but that would be silly.  If you've been setting things up as the general case this whole time by using variables instead of numbers we can just plot it for the range of values on the wheel.  What we come up with is this: 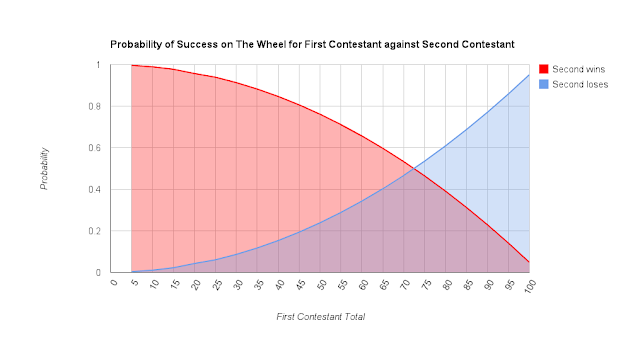 The math from here on out is fairly easy now that we've figured out all the probabilities.  The third contestant - as we've talked about - actually has less choice, so we're making less assumptions.

With that in mind we can cut to the chase and graph it all: 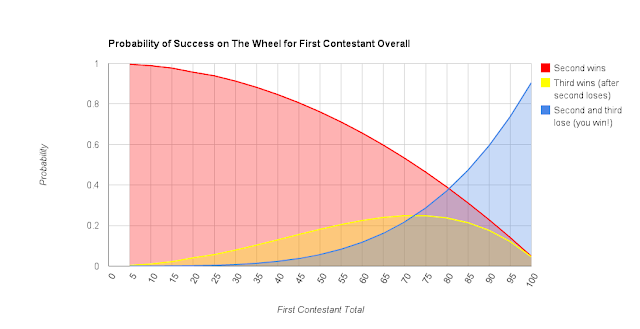 What are your odds of winning with 50 cents now?  Unfortunately, right around 5%.  Even at 80 cents you're still slightly behind (second contestant still has 39% to your 37%), and it's not until 85 cents that the odds tip in your favor (at that point you have a 47% compared to 31% and 22%, respectively).  Even then it's still less than a coin flip, and while you have the best odds of winning among the three contestants you should keep in mind that you don't care who else wins - in both cases you lose.

We can change around the graph to reflect that fact: 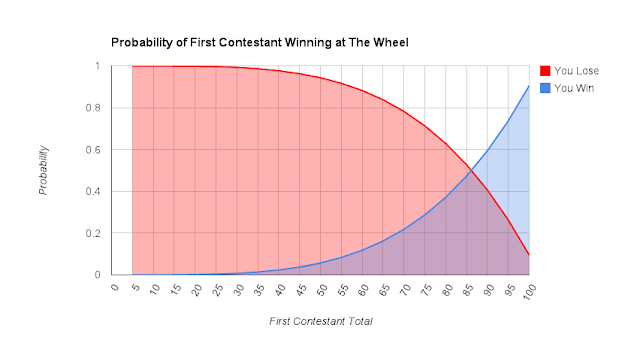 With that in mind, it's not until 90 cents that you break away and finally have better odds of winning than of losing (59% vs 22% and 18%, respectively).

Kind of sad, really.  Maybe you should have done better during your pricing game, and not gotten stuck being the first contestant to spin.  Next time I visit this I'll check in on how much better your odds are if you're the second or third contestant.
Posted by PC at 10:05 AM