In the last few days I've been reading a lot of analysis of this year's first week of NFL football, and have noticed a lot of people talking about the point production in a historic sense.  Most notably - and certainly most repeated - is Michael Signora's tweet pointing out that:

1) A league with more teams means more games per week and (all other things equal) more points per week.  The number of teams has changed over time, and the NFL is about as large as it has ever been.  Weeks later in the season also have teams on bye week, which means fewer games played per week.  How would things look if we controlled for the number of teams in the league and number of games played by instead looking at the average points per game?

Thinking about these things drove me to Google to try to find some data on historic scoring, and I luckily found a site where I could pull down some data.  That site is Pro Football Reference:

And it is AMAZING.  It has pro football data back to the early days of the sport, and I could spend hours going through the site looking through all sorts of statistics.  By the way, did you know that on December 8th, 1940, the Chicago Bears beat the Washington Redskins in that year's final championship with a score of 73-0, the largest blowout AND largest shutout in pro football history?  Today I'm interested in scoring.

The Signora statistic above mentions that this week's 791 point total is the highest first week score in the history of the NFL.  While the NFL does stretch back farther I'm going to look at things back to the start of the modern NFL (after the merger with the AFL in 1970).  For now I also only want to look at regular season, so that we can get all the teams in there.

The first thing we can look at is a trend of average point production per game, by year.  Keeping in mind that we only have one week for 2012 that gives us a graph that looks like this: 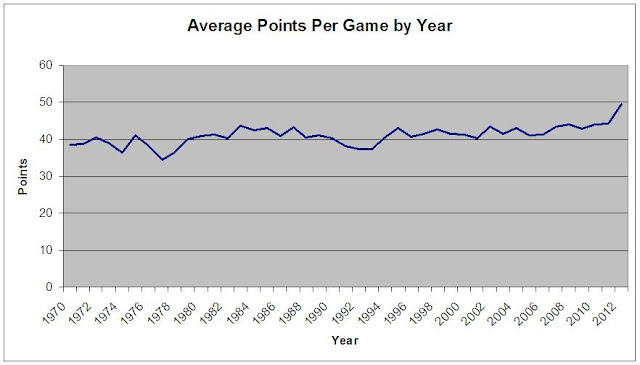 Hmm.  Okay, that looks pretty steady.  There are some dips here and there, notably one in the late 70s and one in the early 90s, but it looks like the average production for most games is right around 40 points.  This week's average was just shy of 50 points (49.44).

Remember, though, that our data point for 2012 is just one week of games, and each of the other data points contains an entire year.  We can use those years that contain a number of weeks (all but 2012) to calculate confidence intervals for those years, allowing us to see if this past week is a week that could reasonably occur in any given year.  Putting those 95% confidence intervals on our above graph gives us another graph: 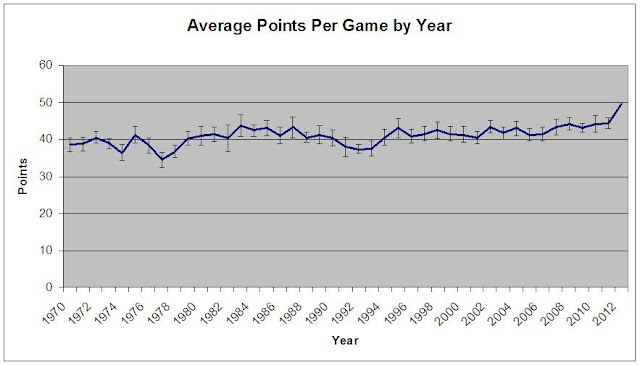 Okay, this is starting to get interesting.  My initial inclination was that this past week wouldn't stand this far outside the norm, but you can see that this past week's average total score of 49.44 rests outside the 95% confidence intervals of every year since the start of the modern NFL.  This would seem to give a bit more solid footing to those speculating on what might be driving this above average scoring.

Still, it's also the case that we can make this more specific than the above graphs.  We know that this past week was week one of the season.  The above charts compare last week to the average of all weeks in every given year, which is increasing the confidence in the annual mean (and thus reducing the size of the confidence intervals).  What does last week look like when compared annually only with other week one games?  Well, it looks like this: 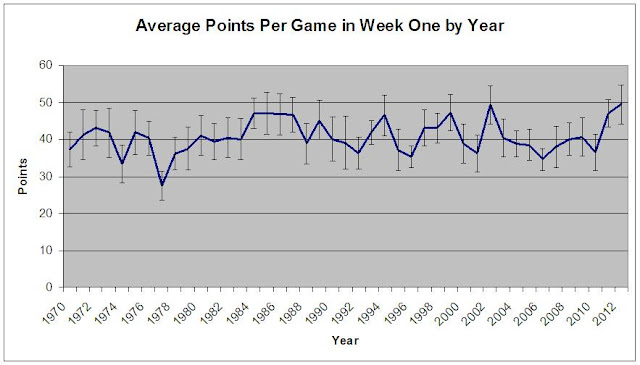 The confidence intervals are now quite a bit larger because we are now averaging across individual games instead of across individual weeks.  Regardless, now we're getting somewhere.  The big spike there about a decade ago actually is a decade ago - in 2002 the average game score in week one was 49.25 (remember, this year was 49.44).  The total number of points scored that week was 788 - only 3 points away from the scores of this week.  In all there are a number of years that show up on that higher end, fairly close to this last week.

This raises a flag for me: week one scores in isolation look much more comparable to this past week's scores.  Sure, this past week is on the higher end of those scores, but in general the scores are much more clustered together.  A simple boxplot reveals that not only is the past week not an outlier in terms of weekly score, but also that only one year has been - and it's on the low end: 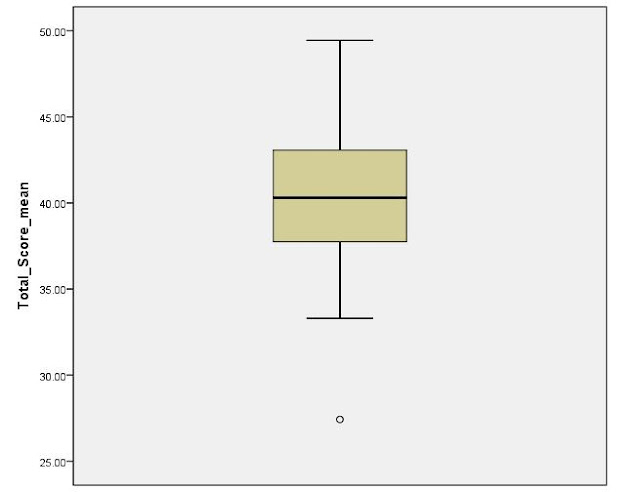 That point at the bottom is 1977, when the average total game score for week one was only 27.43 points.  Five of the fourteen games were shutouts, and of the remaining, two losing teams made only a single field goal.  That means the lowest scoring quarter of the teams that week (half of the teams in half of the games)  put up a combined score of 6 points.  Now THAT is an out of the ordinary week.  This past week?

It looks like the bottom line on this one is that while this week is out of the ordinary in terms of all weeks in any given season, it's not that out of the ordinary when compared just to other first week scores.  What would be really telling is if this trend continued.  If we get the same kind of numbers for week two we might be looking at a trend.  If we don't, we're likely to just be looking at the high end of normality.  Hopefully I'll revisit it sometime later in the season.

We can skip right to the graph complete with 95% confidence intervals: 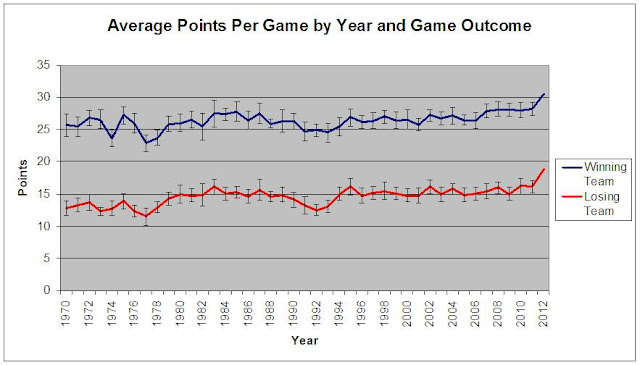 Maybe I'll talk about that one a little later in the season as well.  Consider the above a teaser.