Distribution of birthdays and the availability heuristic

It can't be that my birthday week or two is special, though, right?

facebook is only good at a few things, and holding on to birthdays is one of them.  If you go into the events sidebar and then click on some stuff that makes sense when you see it you can eventually get to a calendar view listing off all your friends' birthdays (or at least those that use facebook and have put their birthday on it, and that are telling the truth).

It's a pretty easy way to pull down some data on a large majority of my friends' birthdays.  I have no reason to believe that birthday would have anything to do with friends' refusal to use facebook, so hopefully that data is missing at random.

It's a fun exercise, and I'd recommend you to do it if you're bored one day.  You might also think that your time of the year is special, and - well - if you do I'm here to tell you that it's probably not.

Well, unless your birthday is Halloween:

October 31st seems to be the most popular birthday, by a decent margin.  Seven of my facebook friends were born on Halloween (hi guys), with the next most popular date being June 7th (with five people - hi guys).  All other dates have four or less birthdays (hi guys, sorry you're not popular).

June 7th is pretty close to my birthday, so maybe this is starting to look like I was right all along?

If we're looking at the days with the most birthdays, we can also take a look at this with the least.  There are a lot of those - days where none of my facebook friends have a birthday.  What's the longest stretch of birthday-free days?  Well, there are two stretches of five birthday-free days.

Interestingly, they are right around the last place I would have expected them.

Well, that would seem to fly in the face of early June being anything particularly special.

There's still some other things we can look at, though.  How about months?  What's the most popular birthday month? 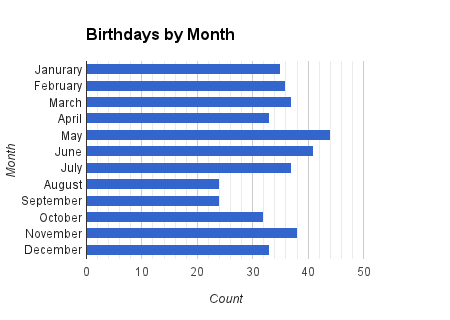 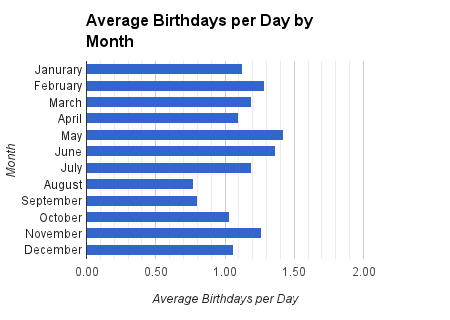 Or we could just look at quarters. 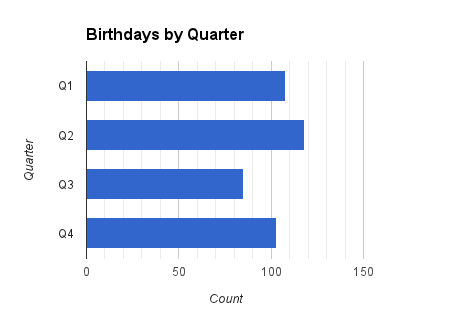 Overall, it looks like the late summer months are somewhat weak, as August and September are the only months where the average birthdays per day drops below 1.  Interestingly, May/June - despite some large gaps that we saw earlier - is still quite strong.  Both these months are closing in on one and a half birthdays a day.  This might actually start to explain some of what I've been picking up on through the years.

Perhaps the fact that June is still such a strong month even with so many days without birthdays is because the days that have birthdays (which happen to be around my birthday) have more birthdays than normal.

Well, the average birthdays per day across the whole year based on my friends' reported birthdays is right around 1.1 a day.  Those 3s, 4s, and 5s in that above table are starting to look pretty good, right?

In all, it's kind of hard to say one way or another that any part of the year seems to be the most populated (though late summer does sort of seem to be kind of desolate).  It is certainly clear that I have been a least a little biased by remembering the birthdays of individuals near mine (probably because I say at least once "hey your birthday is pretty close to mine!).   The spread of other birthdays does seem to be decently random, though Halloween still seems at least a little confusing.  What's the deal with Halloween, seriously?

The moral is clearly that you should never trust anyone with a Halloween birthday (sorry guys - you might be ghost doctors or something).  Happy (belated/eventual) birthday, everyone!
Posted by PC at 2:51 PM