Yes, I'm talking about this part of Wayne's World:


It seems that over the past few posts I've touched on exponential growth from a few different directions.  One of those ways was relating to the proliferation of unique Tetris pieces you can make with a set number of 1x1 Tetris blocks, and the other two were touching on the Wayne's World social network method from above.

Those two posts were the one about my Kickstarter project and the one about saving the post office by creating a national culture of everyone removing and returning business reply mail envelopes from junk mail.

Let's get the obligatory Kickstarter plug out of the way.  The reason that Kickstarter works (when it works) is due to the nature of social networks.  If I just wanted to collect money from the people I knew, I'd simple ask every person I knew if I could borrow a dollar the next time I see them.

It's an interesting social experiment, and perhaps one I'll try sometime, but it's not the point.  The point isn't for people I know to give me money (though thanks if you have!), but for them to tell the people they know.
You see, I might be able to say that I 'know' a few hundred people.  People who if I saw them sitting at a bar in an airport while traveling I would sit down and strike up a conversation with (my favorite test of if you actually 'know' a person).  I don't know that I'm too much of an outlier on that - keep in mind I've said 'know' and not 'friends', which is a whole different story.

If each of those people gave me a dollar (from the above example), I'd have a few hundred dollars.  But if those people instead just told their friends about me, and I got a dollar each from them, well, that's a lot more dollars.

How many more dollars?

Well, let's just make this easy.  Let's say I have easy communication access (can I put that in any colder terms?) with 100 people.  Let's also say that they also have 100 people with whom they share the same access, but those people are 100 different people (I guess I'm in there, too, so maybe they need to have 101 people).

If I did somehow find myself in a situation where I knew 100 people who each knew 100 non-overlapping people, that second set of known people is exponentially larger than the first.  Why?  Because there are exponents involved.

That's not the function, that's simply one step along the way.  There is a function is how the number of people in the primary network (the people I know) are related to the number of people in the secondary network (the people the people I know know).  That function is a simple square: y = x^2.  This still isn't where exponential growth comes into play, but it's worth discussing first.  A square function (in fact, this square function) looks like this: 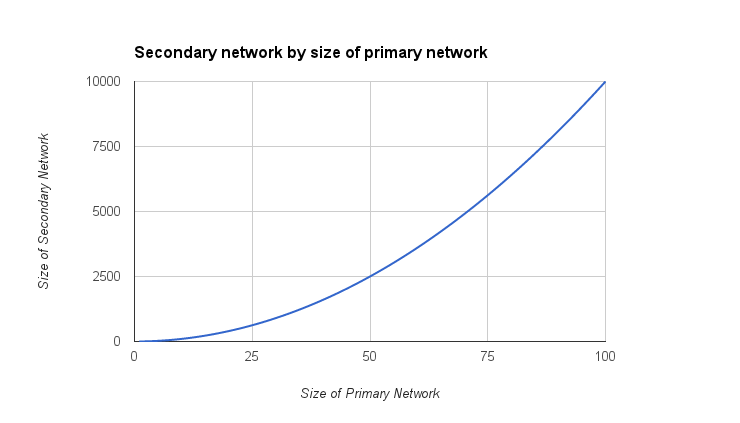 If you happen to have friends who also like telling people things (and also happen to miraculously have a completely unique set of friends aside from you), we would move out to a cubic function: y = x^3.  Now, the number of people that can be reached if everyone has 100 people to talk to is 100*100*100 = 1,000,000

By increasing from a secondary to a tertiary network, we're incrementing the value of the power in the function.  It is though this that exponential growth occurs.  The Wayne's World growth is every person telling two friends, so the function y = 2^x shows how many people you are contacting at that stage of the process (e.g. x = 3 is three steps steps removed from the initial person).  That looks like this: 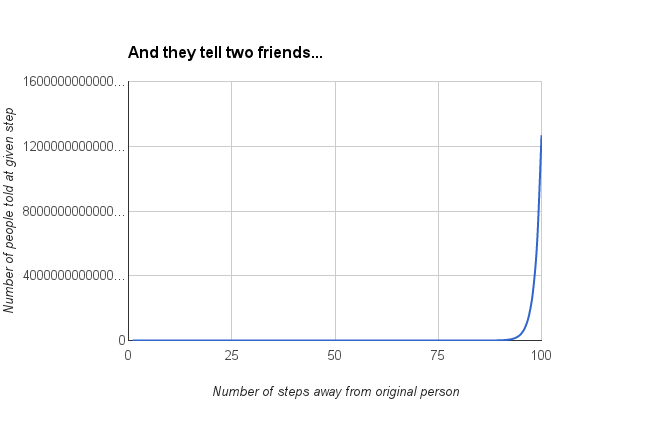 Don't be fooled by the scale into thinking that those numbers below 75 on the x-axis are zero.  They're just really small compared to the end number, but they're still really big.  For instance, 2^25 is still 33 and a half million.  The fact that 33,500,000 looks like zero might give you some perspective on just how big those numbers toward the right end of the graph actually are.

The graph of what we were talking about above, with every person telling a hundred friends is somewhat similar, except all the numbers have a lot more zeros on them.  In fact, since we're working with a nice power of 10 system all the numbers can simply be expressed very easily in scientific notation.  So much so that a table is perhaps more illustrative than a graph.

So, if I told 100 friends about something, and then each of them told 100 (different) friends, and so on, and so on, we'd run out of humans on the planet sometime between the 4th and 5th step.  The trick would really be finding those 100 unique people each time.

You might also note that this is how pyramid schemes work, and why they are always (eventually) unsustainable.  To keep the scheme going you need to keep finding unique people to enter into it.  The longer it goes on the more and more unique people you have to find.

For instance, here's the table for the Wayne's World 2^x method:

So, even if you're just having each person in the system tell two other people, you still run out of people on the planet in about 33 steps through that system.  Of course, an actual pyramid scheme is a bit more complex than this, but this would illustrate one running at peak efficiency.

Let's step back from pyramid schemes for a moment.

Think of it this way.  If two of you each told two friends about the post office plan from last week, and those two people told two people, etc, we'd have the whole US told (again at peak efficiency) at just under 30 or so steps.

Back to pyramid schemes though (I'm kidding), we don't need the whole of the country on the kickstarter - this process at 10 steps still has over a thousand page views.

So, you know, do both those things.

Tetris pieces are growing in perhaps a much more interesting way, that I'm only going to touch on briefly (until I decide to do a post that looks at those 6 and 7 block cases).  I talked about it during that post, but every time you add a block to the system you can place that block on a number of spots on preexisting pieces.  Early in that process you a) have fewer pieces and b) those pieces are smaller.  The growth that occurs at that stage is slow, then.

As you start to get more pieces, and those pieces get bigger, there are both more spots on any given piece to put a new block as well as more pieces on which to do so, which drives this accelerating growth.  Some of these aren't unique, but it's possible that the proportion of non-unique pieces produced at each step has a predictable function as well.

Something to look at later.

Or perhaps something to dream about...