How many of you have ever eaten a five pound Hershey Bar? 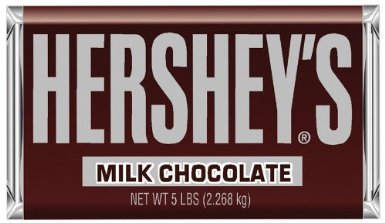 How many of you have ever eaten 3,131 five pound Hershey Bars?

Don't worry, we'll get there.

Today I mostly wanted to talk about Amazon's affiliate reward system, but it actually also gives us a good vehicle to talk about some misconceptions of how the tax structure works.  We also get to talk about giant candy.


Oddly, my thought after finding all of those is mostly disappointment that the Reese's Peanut Butter Cups aren't bigger.  Seems like 'World's Largest' should actually mean something.

I want to use giant candy to talk about Amazon's affiliate programs due to the sheer absurdity of the numbers I'm going to be talking about.  It should also make things nice and simple when we have a nice five pound block of chocolate to think about every time we need to talk about an item sold.

Amazon has a pretty interesting setup, but a fairly complicated one.

The short rundown is this.  If I send you a link (or put it on a page where you see it), and you click on it, go to Amazon, and buy any product, I would get some cut of the cost of that product.  That's the easy part.

The more complex part is what cut I'm getting in any given situation.

[As a brief promotional aside, Amazon is willing to give me money at no cost to you any time you buy any product on Amazon, as long as you got there through one of my links.  If you feel like helping out the blog you can simply bookmark Amazon as this link: ( http://www.amazon.com/?_encoding=UTF8&camp=1789&creative=390957&linkCode=ur2&tag=48808-20 ) .  If you do that - and every time you're going to search for and buy something on Amazon do it through that link - then every time you buy something on Amazon I'll get a small share of it.  Not going to force you, but any little bit helps keep this blog running.  The biggest impact by far is cell phones with wireless plans, which is a flat rate $25 a shot.  I'd buy you a drink for that sort of contribution.] 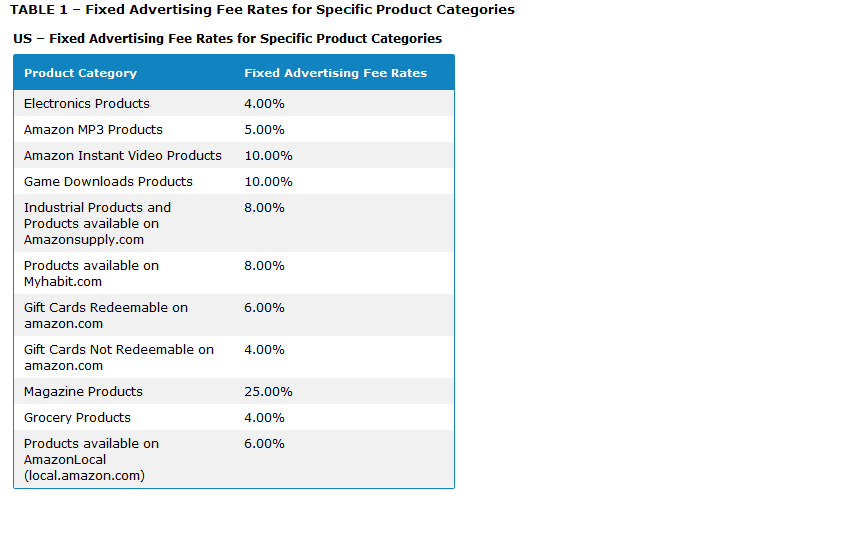 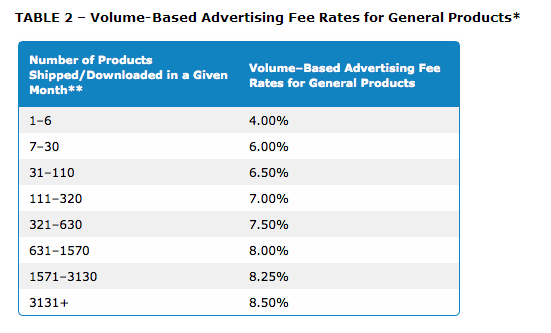 Now, the first table is pretty boring, aside from the fact that any of you looking to buy 'magazine products' on Amazon should let me know.  We're also going to look the other way and pretend that giant chocolate bars don't fall into the 'grocery' category.  We're doing this because anything that doesn't fall into one of those first categories (or other categories they specify elsewhere) falls into 'general products' and the much more interesting second chart.

It's even more interesting if we start to use it to make some graphs.

Let's assume that one of my readers really likes Hershey bars.  They read this post, then click on this link:

which takes them to the Amazon page for five pound Hershey bars.  If that same person were to buy one of those bars, Amazon tosses me a  Jefferson and some change ($2.08) at the end of the month because I sent them there.  That $2.08 is (from the above chart) 4% of the $52.00 current price of a giant Hershey bar.

Now, let's say that same person REALLY likes Hershey bars, and goes back after putting down the first one to pick up five more giant Hershey bars.  How much do I get for each of those?  Well, it's still under seven items, so I still just get $2.08 a bar.

A few days later, the same person decides that six giant Hershey bars are great, but they'd really be happier with just one more.  They pick up one more - how much do I make on that one?

Well, more than $2.08, because I've now helped Amazon sell seven items in a given month.  At that point I would get bumped up into the 6% range for that month, and start bringing home $3.12 for every bar.

But what about the six bars I had already helped sell previously?

Well, it's not the end of the month yet, and Amazon has yet to cut a check.  They were going to give me $2.08 for every bar, but now I've found my way into a better part of the scale.  Pretty soon Amazon will start comping me drinks, I would imagine.  At the end of the month, I get $3.12 for every one of those seven bars.

When six bars had been sold, I was going to get $12.48.  On the purchase of the seventh I didn't just make the $3.12 for that bar, but made up a bunch of money on bars that had already been bought.  In fact, the money earned after the seventh bar is $21.84 - by convincing my chocolate-loving reader to pick up that seventh bar I actually earned $9.36, or a full 18% of the cost of a bar.

Let's say I was really persuasive, and convinced this (apparently pretty well off) reader to drop some cash on stockpiling for the winter by buying 125 giant Hershey bars.  Here's what that looks like in a graph. 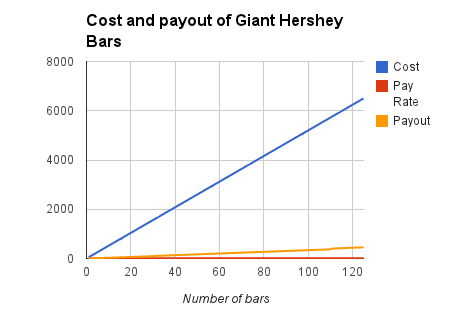 You can see that the cost is starting to become pretty decent, but with three things on the same graph it's hard to make sense of it (or even name the y-axis).  If we remove cost we get this: 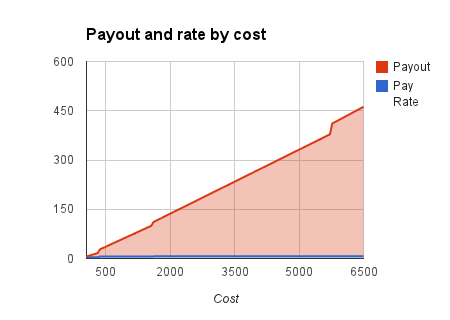 And you can start to see some of the jumps in payout that match up with changes in this scale.  Like I said, when the seventh item gets bought I get paid more on all the items before.  Amazon doesn't make their tallies until the end of the month, so the place you end up in terms of number sold is the rate you get on everything.

At least on everything that falls into table 2 - remember we're basically forgetting about the much more boring table 1.

We can even make a graph that illustrates this a bit better by plotting out how the percentage changes based on number of items sold. 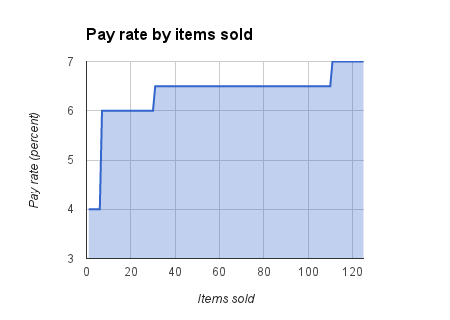 We by no means have to stop at 125 bars sold.  We can take it out to the full range of Amazon's structure, and assume our friend hit the lottery and decided to spend some of that on building a chocolate house somewhere in a cool enough climate. 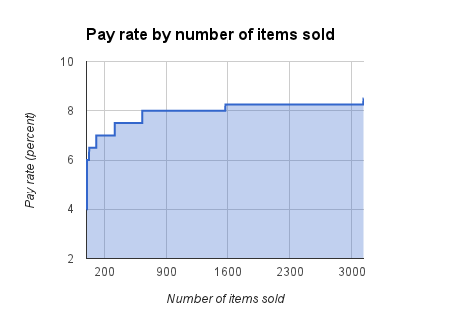 We can graph the actual payout per number of Hershey bars, and that looks like this: 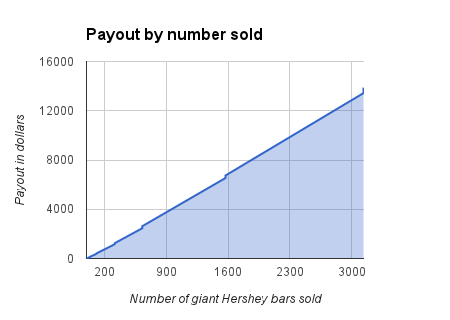 You'll notice the upticks in the graph at several points - these are the points where the payout rate changes for all products bought that month.  At the first jump it nets me a few extra dollars, but as things continue to escalate these jumps get bigger and bigger.

Now, I'm not going to force you to do calculus here (we're really close, though), but we can take a look at the incremental gain of adding one more Hershey bar to the pile at any point. 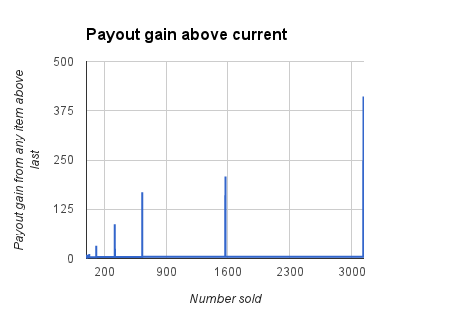 We are again faced with a graph whose immensity of scale wipes out some of the (less important) effect.  The main point of this graph are the peaks - while the rest of the line does have variability it is negligible in this case.

Let's walk through it, because there's a really important point here.

Now, $9.36 is enough to make me happy, but not enough for me to pressure someone who has just bought six bars into buying their seventh.  That $9.36 is only one of the peaks on this graph, though.  Let's cut to the chase.

The point is that it's actually quite foolish to finish the month at 3,130 sales, as I'm simply leaving money on the table.  If I'm smart enough to trick someone into buying this much chocolate I should have the good numerical sense to never stop when so close to such a payout.

Take a quick pause for a moment - do you get that?  Because it's about to stop being about fifteen thousand pounds of chocolate.

Some of you might think this whole example looks vaguely familiar, as if you interact with systems like this occasionally.  I kind of gave away the spoilers in the title, but this second chart from Amazon does look vaguely like a series of tax brackets: 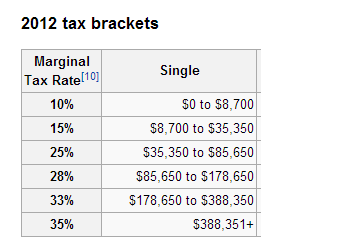 I don't want to talk too much about taxes, because it's really a secondary part of this post and I've already talked about taxes quite a bit before.

The main sticking point that I think most people have with taxes is that they assume them to play out one way, when they really play out quite differently.

You may think they play out the same way that Amazon hands out checks in exchange for chocolate (and I guess other stuff too).  You make $5,000, you get taxed at 10%; you make $400,000, you get taxed at 35%.  You can see that this introduces the same (but in the opposite direction) sort of argument as buying the 3,131st Hershey bar yourself.  If you are making $178,000 it would seem stupid to make another thousand and have all your money taxed at a higher rate.  Just stop making money, right?

Well, that thought process comes out of a complete misunderstanding of the process of taxation.  Unlike Amazon - who waits until the end of the month when everything is all set - taxes are paid on every dollar as you earn them.  You never have to go back and retroactively pay a higher rate on money that's already been earned.  When you move to a higher tax bracket you only pay that higher rate on the money you make from that point onward.

If you're thinking that you kind of get it, I'd suggest reading this earlier post.  I'd also suggest that post if you are simply lost but want to try to make sense of it.

If you're one of the people who feels like they now understand taxes better (or had already understood them pretty well before), you should feel proud of yourself.  Proud enough that perhaps you've earned yourself the right to treat yourself to something nice?